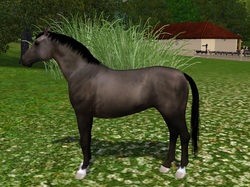 
Bio:
After Lexi saved Velvet from a injury out in the wild, she had her mind set on fixing and saving such a wonderful beast. When the time came to bring her home, she had managed to develop such a friendship with this wild mare, that there was no point in returning her to the wild. Lexi swore she would never break this wonder mares spirit and let her be free. Velvet is never confined and is able to roam all over the area as she pleases, but she is willing to carry Lexi around on her back, but only Lexi.

Velvet has many talents, some of which are to open stables, break into feed sheds, and let the other horses out. Which thankfully she doesn't do very often. If for some reason she feels she wants to be inside she has no issues opening the stable door and doing things for herself. She is often caught in the feed shed, but thankfully only eats her fill, but when she's not in the feed shed, she's out in the apple orchard getting yummy red apples.

Since Velvet is still wild she isn't at home very often, so Lexi has learned not to worry about her very often, she always come back. When she Isn't causing mischief she is with her dear friend Rou (Roulette Revolver), a fiery strong mare that Velvet couldn't be without. There inseparable (and sometimes competitive) and both enjoy a long runs together and just being with each other.
Powered by